How can we help you today?

How do I play Blasty Bubs? Print

The goal of the game is to make as many points as possible by destroying all the blocks in each level.

You destroy blocks by throwing balls called Bubs at them from the cannon at the bottom of the screen.

Aim by pressing the screen and holding it down to move the cannon from left to right.

Release your finger to launch the ball in the direction the cannon is pointed at.

Destroy all the blocks in a level to move on to the next one.

The game ends when you run out of balls to shoot out of the cannon. 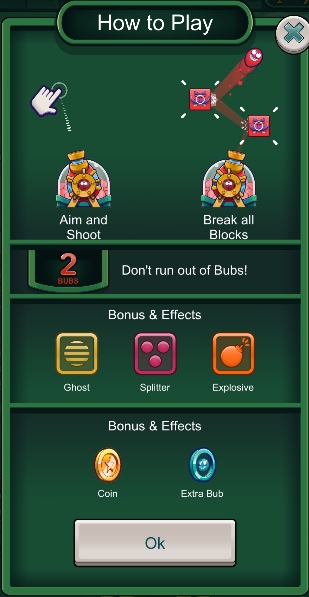 R
Rodrigo is the author of this solution article.

Did you find it helpful? Yes No

Send feedback
Sorry we couldn't be helpful. Help us improve this article with your feedback.